Mirroring and backing up data

The more data is processed during routine business procedures, the more serious the issue of its safety and security. There are several technologies that allow you to ensure the highest possible security and safety of data (whether it is a 1C database of a medium-sized enterprise or a transaction history in a large bank), the main ones among them are server mirroring and data backup. They are often confused or thought to be interchangeable. This is not true. Let’s figure out how everything actually works and what you must pay attention to. What is mirroring?

What does a computer usually consist of? Motherboard, processor, RAM (random access memory) and hard drive. When an application is getting loaded on a computer or any other process is going on, the greatest load falls on the hard disk. No matter how the technology of the processor, RAM or data bus evolves, the hard drive will always be the "bottleneck", the weakest link of the system. In order to solve this problem, thus to speed up and secure the processes, there is a mirroring.

A mirror is an exact copy of a server. For example, when working with documents that are stored there, you simultaneously work with both copies. The operating system takes one document from the main computer, and the second one from the mirror. It is only right that they open at the same time twice as fast. Thus, mirroring is when you have two servers running with the same amount of data. Cons are that you physically need two media, preferably the same, to store data, and you have to bear more hardware and electricity expenses. Pros are speed and fault tolerance. Is server mirroring the same as backing up?

Mirroring is often confused with backup, but these are two different processes. First of all, mirroring is necessary for the system to be fault-tolerant. If one server fails for any reason, there is a second one to which the data is copied in real time. Moreover, most often the business doesn’t use the real-time mode since it is much more expensive than transferring data once a day. This reduces the cost of service, saves electricity, but does not ensure 100% of safety for all data.

Due to the low level of "maturity" of the Kazakhstan market, enterprises sometimes prefer to lose data or lose the operability of systems, instead of paying more, taking care of security and uninterrupted operation. Real-time mirroring technology is expensive and therefore rare in our country. It is used only by large marketplaces and banks, since for their processing systems, data loss is too critical and it’s absolutely unacceptable to lose any data. Okay then, what is a backup?

It is believed that if an enterprise keeps a certain amount of data for a certain period, it is a backup. But if the backup is made to the same computer on which you are working, this is not a backup. The backup must take place on a separate machine, disk or cloud space. The main rule of backup is that data should be stored in a different place, preferably in a different location (in case of fire or robbery). For example, an enterprise has a server mirror. When a ransomware virus enters the system or an accountant presses the wrong button, the data is deleted from both hard drives and cannot be recovered in any way. A backup assumes that the data is stored somewhere else, it cannot be demolished by pressing a button. In addition, the backup must have a schedule.

Here at IT Support we recommend making a backup every night, keeping daily data for a week, monthly data for a year, and yearly data for five or six years. The backup is done on the basis of two main considerations: to exclude the potential influence of the human factor and to protect the system from ransomware. In the first case, the data remains safe if the user accidentally deletes something; in the second case we are talking not only about data security, but also about the well-being of the business in general.

Encoding viruses enter the system in the form of a letter or through a breach in the OS protection, encrypt critical data (for example, the 1C database), and then extort money for their decryption. At the same time, you can’t be sure that after paying $ 5,000 or more, you will receive your data back. And if the correct backup is configured, you simply aren’t afraid of such a threat.

Backing up is like insurance for your business: it is the ability in case of emergency to start it from yesterday, not from scratch. The more often you make a proper backup, the less likely you are to face serious consequences. This is similar to insurance for individuals in the event of death but only you insure the data so that its "death" won’t happen at all. So:

• Mirroring and backup are two different methods. • Mirroring significantly speeds up processes, but does not guarantee 100% data security. • Each company must have a backup. • Data is backed up every night and kept for at least a month. It is recommended to store monthly and annual backups as long as possible. The copy should be in a different place, not where you use this data. • If you want complete security, make a backup’s backup. It is a long and expensive process, but for this money you make your business be 99.9% available 24/7, regardless of any circumstances. 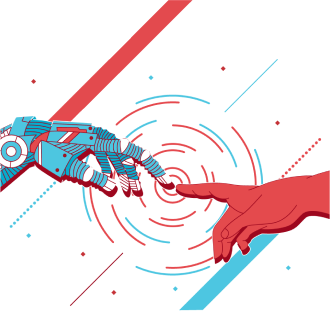 Maintenance of complex IT infrastructures
To learn more

Leave your contact details and we will call you back

Your request has been accepted for processing.
Our manager will contact you soon.